At work I recently spent a lot of time trying to get a running Docker container to connect to a service running on localhost.

The setup is this: we have a Docker container that runs inside a Docker bridge network together with other Docker containers it can communicate with. On the host machine there is a service which listens on 127.0.0.1:8088. For the purposes of this blog post, let’s just assume this service’s job is to stream messages to some server.

I wanted one of the containers to connect to the service running on localhost. In this post I will explain how I got it to work (only on Linux). 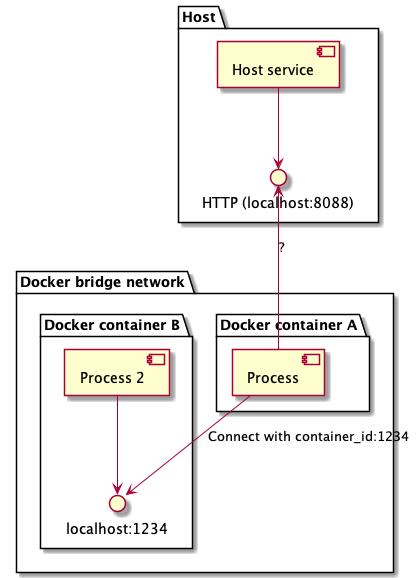 Docker containers inside the same bridge network can easily communicate with each other by using their container ID as the host name.

However, Docker Container A cannot easily talk to something on localhost on the host machine. There is even someone on StackOverflow saying that this is not possible!

Without network: host you can’t go back from a container to the host. Only host to container. This is the main ideology behind containers. They are isolated for both stability and security reasons.

This is a truth with modifications. The way Docker manages its networking is by suitably modifying iptables. Which means that we also can do the same!

You can set the bridge name yourself when you create the network with the following command (source): (just remember that it can be at most 15 characters long)

We need to allow routing from the bridge to localhost:

Note that this has some mild security implications.

The next step is to use iptables to forward traffic to the bridge gateway to localhost.

Once this is done, you can connect to the service on localhost on the host machine by calling host.docker.internal:8088.